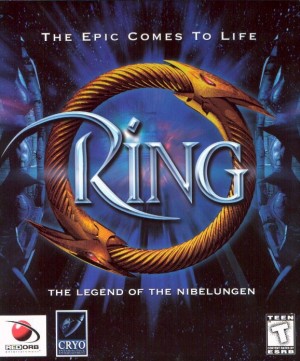 Okay, here I go again, flying in the face of a chorus of bad reviews. I know, I’m so contrary. When released in July of this year, Arxel Tribe’s Ring received some of the worst reviews of any game in the late 90s. And to all of those reviewers, I give a grand, Wagnerian raspberry.

Not that this game is without problems. I’d be the last to pretend it’s a perfect game. In fact, I’ll reverse my usual procedure and talk about the bad stuff first.

Ring is an ambitious game that is based, as its title suggests, on Wagner’s epic Ring cycle: Admit it, you’ve got to admire the ambition of these guys . . .oh, sorry, I promised the bad stuff first. Actually, the game is only based on two of the operas: Das Rheingold and Die Walkure. It contains virtually no elements of Siegfried and Götterdämmerung. 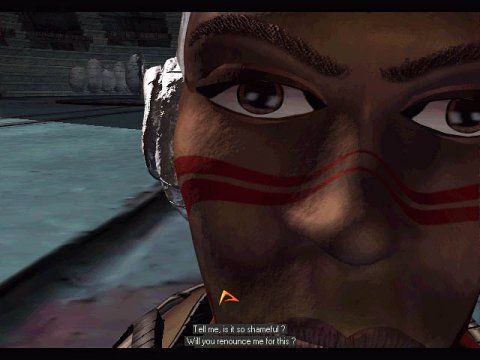 Also, the voice work and dialogue is excessively, oppressively, well – Wagnerian. I mean, these characters don’t talk, they declaim! They orate! They bellow! And none of it is very interesting or makes very much sense. In fact, in the Loge chapter there is a conversation that has to take the prize as the longest, most pointless, most stultifyingly boring conversation that I’ve ever seen bring a game to a screeching halt. I mean, this pile of words made the dialogue in The Day the World Broke sparkle in comparison (and The Day the World Broke is the only game I ever gave up on without finishing – I kept falling asleep at my terminal).

I guess I already mentioned that none of the plots make much sense. Well, maybe they make sense if you’re German. Or an extreme Wagner buff. I’m neither, but I love Wagner’s music and have a passing familiarity with the Ring Cycle. Plotwise, it wasn’t enough! 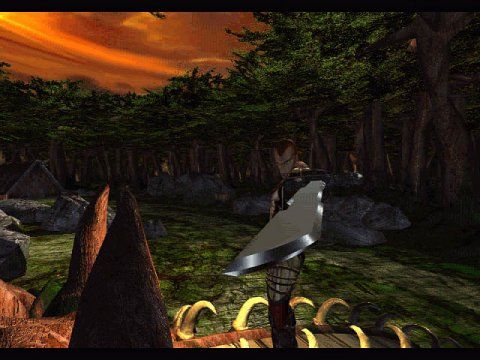 However. My friend and I barely cared about all these problems as we played the game. Why? Because the game if FUN. For two main reasons.

The first reason are the visuals. The folks at Arxel Tribe display a truly extravagant imagination in Ring. They create a mythical space-age Wagnerian world that’s really something to behold. Whether it’s watching Alberich skimming across the Rhine on a futuristic skateboard, or rolling along the mine-cart tracks of the vast Nibelung gold mine, or exploring a mysterious treehouse complex, or a multi-environment necroplis, this game never ceases to be a feast for the eyes. Like their newer game Faust, the designers have created environments that are a true pleasure to explore. Of course, the importance of this primary adventure game virtue cannot be overstated.

I’ve read reviews that actually criticize the visuals in the game. I would be happy to make an optometrist appointment for any of these unfortunately, visually impaired writers. Trust me on this one, folks. The graphics are a knock-out. 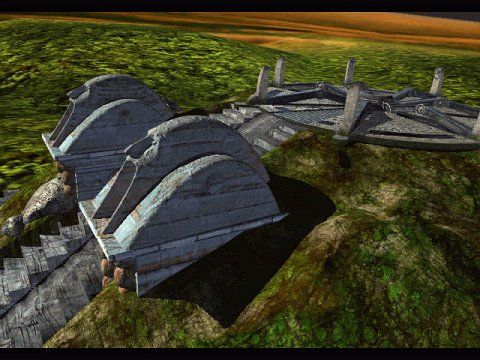 The second reason we stayed glued to the computer and devoured this game in two sittings is the excellent collection of puzzles. We found the puzzles in Ring to be just plain fun. Not terribly hard or complicated, but engaging, imaginative and varied. We got to play with a little planetarium, build a golem, melt a series of ingots, fiddle with a hologram blueprint, and lots of other stuff. Yes, they are strange, and some are even a bit illogical. But they certainly weren’t the same old thing, which we really appreciated.

This is my second Arxel Tribe game (I recently played their brand new Faust), and I have to say they’ve made a believer out of me. I’m looking forward to their next two adventures, Pompeii and Jerusalem.

Very underrated despite its flaws. A fun, if imperfect, game.

GAME INFO Ring: The Legend of the Nibelungen is an adventure game by Cryo Interactive Entertainment released in 1999 for PC. It has a Stylized art style and is played in a First-Person perspective.

What our readers think of Ring