I can only imaging the intense pressure on the Cyan team as they geared up to create a sequel to the best selling game of all time. It is a typical challenge that you often see. A Company, individual etc. creates something so successful it sets new standards and the world cries for more so plans are made for a sequel. The problem is that many of these follow-up efforts lack the freshness and creativity of the original. Rarely do you get something that surpasses it predecessor in quality and content, however it has been know to happen.

Once again you return to help Altrus in this first person perspective game. This time he enlists your help to save his wife Catherine from his father Gehn. Catherine has become trapped on Riven and you need to rescue her and banish Gehn. This doesn’t sound like much of a story but it barely scratches the surface of what your you will find when you arrive in Riven. For it is a homogenous world complete with religion, culture, language, and myths and in order to save Catherine you will have to learn its numbering system, decipher its myths and explore its vast spaces.

The graphics in Riven are so superb that they rival anything I have seen in other games. The attention to detail is phenomenal, individual bugs fly by; hills are made up of stone, dirt and grasses that actually blow in the wind. This is something that you can tell took a great deal of time and care to create, it is also a hallmark of this game. For whether it is the graphics, sound or puzzles everything is given the same attention to detail, the same depth. The motion in the game is done through dissolve transitions which gives you the impression of actually walking through out the game environment. Every building has its on texture and lighting is employed to bring out crisp details in every scene. At one point as you watch two seal-like creatures scurry off you can actually see them swimming under the rippling water. The graphics are so immersive that when I first tried the tram system that links the individual islands in Riven I cried out "Whoa!" as I felt my stomach actually react to a steep dive. 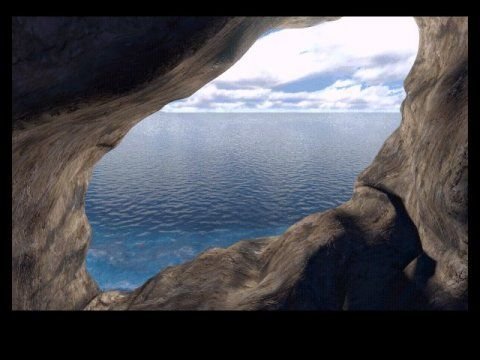 Each scene in Riven has its own set of unique sounds on top of the extensive and diverse soundtrack. The box right away notifies you that you should be using a top-notch sound system on your computer to fully enjoy the game’s soundtrack. Ambient sounds assigned to doors opening, bridges being lowered are always dead on and really help to flesh out the game. All this detail made me forget I was in my basement with the lights off and not actually in Riven.

In the tradition of the adventure genre Riven is a mouse controlled point and click game. This interface works nicely with the animation in the game for as you touch certain objects they seem to come alive allowing you to interact with them. However, this is also where one of the aspects about the game I didn’t like came into play. There was a good deal of pixel hunting at certain times. I found myself advancing one step running the cursor all over the screen and then repeating the same operation again vainly hoping to identify a hotspot. Most of Riven’s puzzles depend on a player’s ability to immerse them selves in the world’s culture and mythology, explore its vistas and pick up clues. As with Myst you are alone on this world and have only a brief encounter with other characters. Most often you will find your self pulling levers, pushing buttons and catching frogs to solve the mysteries in the game. This is not to say that the story line is linear, quite the contrary, unlike some games that demand you solve certain puzzles in a certain order to advance Riven lets the player work through the vast amount puzzles in almost any order. There is no wrong way to play Riven. One word of caution here however, there were a few puzzles that were so hard to solve that I got so frustrated I started cursing the computer, so be for warned lonely traveller.

This game is so good that if I taught a class on interactive fiction I would use it as my example of how to create a great quality game. With the exception of the a few difficult puzzles and some pixel hunting I can not find any reason I would advise someone not to play Riven. There are just so many positive qualities that sell this game I would not be surprised if it someday surpasses its predecessor in sales. If you haven’t played Riven I strongly suggest you get yourself a copy as soon as possible.

WHERE CAN I DOWNLOAD Riven: The Sequel to Myst

Riven: The Sequel to Myst is available at:

Dare I say better than the original? You bet! A worthy successor to Myst. Riven will keep you at your computer for hours and up all night.

GAME INFO Riven: The Sequel to Myst is an adventure game by Cyan Worlds released in 1997 for iPad, iPhone, Mac and PC. It has a Illustrated realism style, presented in Slideshow and is played in a First-Person perspective.