There is a company based in France that has for years toiled away to create games that intertwine history, game play and technology. If you have no clue what company I am talking about you are missing out on a library of interesting and satisfying games. Unfortunately for us North Americans, Cryo does not publish many of their games here. So much is the loss for us since they are a company that truly creates wonderful things. However, this little gem can be purchased on this side or the pond through Interplay.

Versailles is a game along the same lines as the Last Express and Titanic: Adventure out of Time. Unfortunately, I just lost a few readers right there. I can hear your thoughts "Oh no, another edu-game!" Yes this game does recreate the world of Versailles with in the hey day of Louis the XIV the Sun king but there is more to this title than meets the eye. For Versailles has a mad bomber on the lose and it seems everyone at court has a reason for wanting to plot against the king. You, Lalande, the king’s valet are entrusted with a potential deadly pamphlet that has surfaced fore telling the burning of the palace. Bontemps the kings’ most trusted advisor has commissioned you to find out who is behind the conspiracy and you had better be quick because you only have one day to do so.

Versailles is a first person perspective game where you as Lalande manoeuvre around the palace and the grounds ease-dropping on courtiers and finding clues. An inventory based game, much of Versailles requires you to find items and then correctly connect them. A nice touch to the game is that it is broken into acts, I liked this because it lets you know you are advancing through the game and with each successive act you get to access more and more of the palace. While working your way through the palace your cursor changes shape to indicate people you can talk to, conversations you can listen too, or items you can pick up or use. The interface is simple and straightforward and many of the characters and items found throughout the palace offer you the opportunity to access historical information about them. Luckily you have a map built into your interface to help you find your way around, because as you advance through the game the amount of space you have to traverse can become quite confusing. 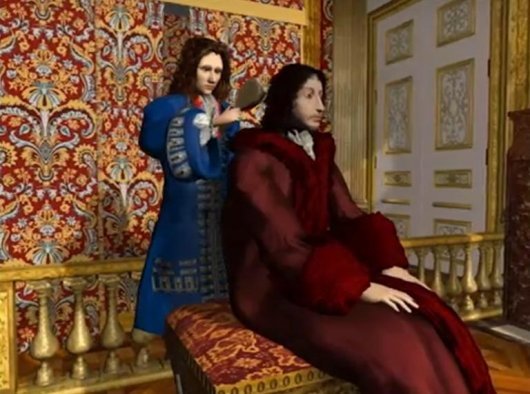 This game was created with the help of the Reunion des Musees Nationaux in order to truly recreate the palace as it appeared in 1685. This is no small feat considering that much of the palace that existed at that time has long since been renovated or changed. The rooms are filled with faithful recreations of works of art, chandeliers, and appointments. Movement through these rooms is done primarily in the four cardinal directions as well as vertically, however you can rotate around 360 degree thanks to Omni 3D. Visiting Versailles helps you to truly understand why the French kings where considered to be akin to the sun god. Every room is a work of art in its own right, with detailed murals, furnishings and everything that an emperor could think of to want.

You quickly find out as your listen to conversations that opera has fallen out of favour, as it appears that the king’s new wife does not appreciate it. The game however, does not suffer from any such predicament and includes a beautiful soundtrack of musical pieces that blend nicely with the atmosphere of the game. This is a game that benefits from the use of classically styled music. It is never overpowering and I found the music to be very pleasant. However, if you prefer no music the game does allow you to the option to turn off the background music. 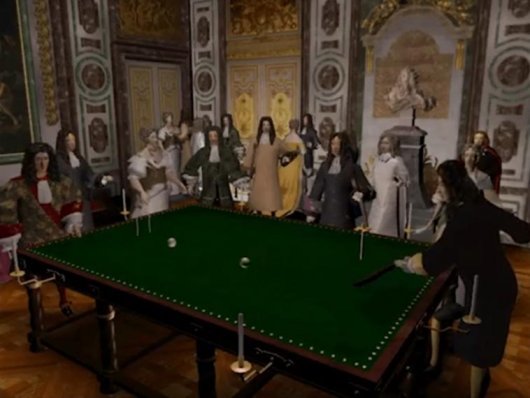 Versailles is a straightforward linear adventure game that will not give experienced gamers too much trouble. Each act is self-contained with Lalande not being able to progress until he has solved everything in the current segment. Most puzzles consist of matching up gathered inventory items with drawers, doors and other objects found through out the palace. However, a great deal of the game also depends on picking up information from conversations and if you get lost you can always turn to Bontemps who is always there to guide you. There is a maze at the end of the game that will make many groan but for the most part you will be able to get by with a little ingenuity and logic.

Versailles is not an easy game to find in North America but if you get the chance to purchase it I suggest you do. The success of this game convinced Cryo to launch a series of games (China, and Egypt 1156BC) along the same line. There is something enchanting about the chance to use a game and technology to explore lost places and cultures and Versailles makes the most of this mystique. Hard core adventure fans may find the puzzles to tame but I think that most will play this game and enjoy it not just for its game play but also for the chance it affords them to experience a little bit of history long past.

Little piece of history that can be easily explored and digested. Oh and it is a lot of fun too.

GAME INFO Versailles 1685 is an adventure game by Cryo Interactive Entertainment released in 1997 for PC. It has a Illustrated realism style and is played in a First-Person perspective.