Interplay was never exactly a company one would rank among the pantheon of adventure game publishers, but, like almost every other computer game publisher, at one time they dabbled in the format before abandoning it for apparently greener pastures (however, I forgive them this transgression in light of their restoring dignity to the role-playing genre). But before doing so, they managed to publish a handful of adventure titles, not the least of which were, in my estimation, two of the best games to emerge from the horribly bludgeoned Star Trek license (unfortunately the greatly exaggerated “death” of the adventure genre consigned the promising but ill-fated third installment Vulcan Fury to a cold grave).

Also among these was a relatively overlooked adventure published in 1996 called Normality. While, to the best of my recollection, Normality never particularly endeared itself to the adventure gaming community, it’s a prime example of the genus of games that I’ve come to affectionately refer to as the “light beer category.” The logic behind this classification should become more apparent as we dissect and examine the game’s components.

In Normality, your objective is to assume the mantle of Kent, a seemingly affable slacker and resident of the city of Neutropolis, a dismal burg where ominous black clouds perpetually block the sun and a strict behavioral code is enforced upon residents which strictly prohibits acts of creativity, individuality or any other behavior that would otherwise cause a person to deviate from the established standards of “normal” behavior. Naturally, Kent is one of the few free-thinkers left in this society and throughout the course of the story, your job is to unravel the machinations of the evil dictator of Neutropolis and liberate the denizens of the city from his oppressive grasp, bringing back sunlight and anarchy to the masses. 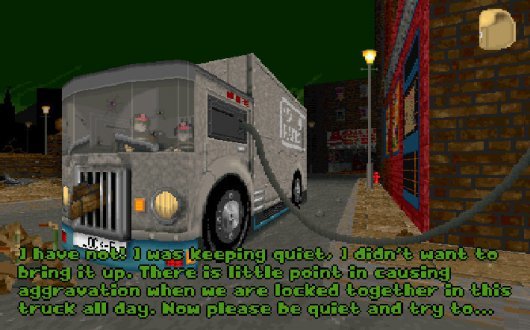 While this doesn’t necessarily sound like a particularly light-hearted premise, Normality is a strictly tongue-in-cheek adventure, with Kent functioning as essentially a stoner version of Harrison Bergeron. However, unlike the best comedic adventures (e.g., Monkey Island, Grim Fandango, Sam & Max) the humor in Normality isn’t especially clever or subtle and in most cases operates on the same level as the average sitcom—the jokes are numerous, obvious and not particularly funny, but not bad enough to change the channel. That having been said, while the humor for the most part misses the mark, the story is fairly entertaining and managed to maintain my interest throughout the game.

Perhaps the greatest strength of Normality, though, lies in its puzzles. These are primarily inventory-based and, while not terribly difficult, should provide a decent challenge to most gamers. Although I question the logic behind a few of the solutions, the answers to most of the puzzles are fairly intuitive and should avail themselves to most gamers with the application of a little logic or, at most, a little tenacity.

In addition to Normality, Interplay also published one other title created by the developer Gremlin Interactive—the outstanding action/adventure hybrid Realms of the Haunting. As such, Normality makes use of the same graphics engine as ROTH, making this a first-person adventure set in a fully-navigable 3-D environment. Obviously the dated engine doesn’t produce visuals on par with UT 2003, but given the game’s age, the graphics still manage to acquit themselves nicely and are available in SVGA (800x600) resolution. 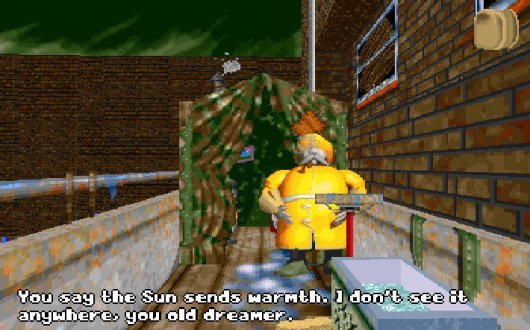 The game’s interface is handled primarily via a menu accessed by right-clicking the mouse (similar to Full Throttle), which hosts the standard complement of adventure gaming actions (talk, use, examine, etc.). As a nice touch, these are alternately available via keyboard shortcuts. Navigation, likewise, can be handled via mouse or keyboard. However, as with ROTH, the navigation controls aren’t especially intuitive and can be somewhat frustrating to adapt to. Fortunately, once I became accustomed to the control scheme, this ceased to be a major issue.

Up to this point, my complaints with the game are few and far between, but unfortunately Normality contains one nearly fatal flaw—Corey Feldman. Somewhere between establishing a successful career as a mildly annoying child star and sacrificing what little dignity he had left to become the poster boy for celebrity has-beens in a third-rate reality program, he found the time to do the voice work for an adventure game. At worst, the manner in which he affects Kent’s voice with the slow drawl of a horribly exaggerated surfer accent made me want to pierce my eardrums with a ball-point pen. At best, it was something akin to a mosquito bite that you can’t quite reach. To be perfectly fair, once I got into the game and overcame my initial repulsion, I found it to be tolerable, although I found myself on more than one occasion reaching for the (blessedly included) key to skip the dialogue (for those with weaker constitutions than mine, the voiceovers can be disabled from the options menu).

Aside from the Feldman debacle, I have to admit that, in the end, I enjoyed Normality, which falls squarely into the realm of the “good but not great.” It’s not a memorable adventure, and I’ll likely have forgotten my exploits in Neutropolis not long from now, but it ultimately succeeds insofar as providing me a few hours of much-needed entertainment. And thus I shelve it in my “light beer” category of games that, while not nearly as filling or full-flavored as a good porter or ale, still taste perfectly good after a long day at the office. Fortunately, though, playing Normality didn’t make me go to the restroom every five minutes.

Normality is available at:

GAME INFO Normality is an adventure game by Gremlin Interactive released in 1996 for PC. It has a Stylized art style, presented in Realtime 3D and is played in a First-Person perspective.