We get a small commission from any books sold.
All Bitmap Books
Written by
Tom King — September 8, 2002

Nightlong: Union City Conspiracy promises a walk on the 'blade-runner' side of the cyber tracks, and it makes good on that promise in almost every respect. You play gruff cyber-PI Joshua Reev, whose character would feel right at home in a William Gibson novel - among the patrons of the Cognitive Dissonance, sipping a futuristic espresso.

Joshua has been asked to return a favor to an old friend, the governor of Union City. It seems a subversive organization is behind several terrorist acts on the city, and Joshua has to infiltrate their ranks and sabotage their efforts to save the governor's political career. 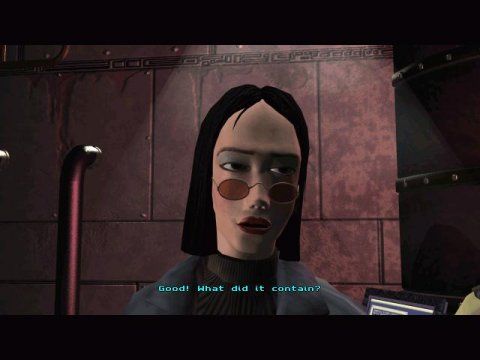 Nightlong is a traditional third-person, point-and-click adventure. You play in widescreen format, a black bar at the top and bottom to facilitate your pop-up inventory and seamless integration of cut-scenes and FMV.

Other than a vague score here and there underlying the cut-scenes, there is the basic background music in Nightlong. This is a shame, as a movement-specific score would have imbued an added depth to an already cinematic feel. Much like voice-work and scripting, music can sometimes be relegated to the back seat of a deadline-destined bus. Whether this was the case with Nightlong or not, a soundtrack would have greatly improved the players’ level of immersion.

The voice acting is acceptable, if not especially good at times. When Joshua would make a glib remark (Solid Snake style), it reminded me of an old digital answering machine that I used to have. I ended up chucking it into the trash bin because the messages were always so garbled. While not nearly that bad, the voice of Joshua sounds a little vox-like. Dubbing is definitely not spot-on, but if you focus on what's being said instead of how it’s being executed (like Lamaze, focus on the waterfall, not the pain), it is less a source of distraction. 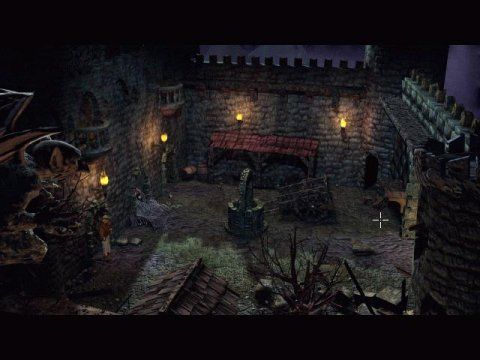 The graphics, this game's best feature, are excellent. Loads of 2D pre-rendered backgrounds (80+) provide tasty eye-candy. Multiple kudos to Team17 for their environment concepts. Their color palette is very impressive. The environs have an amazing amount of dynamic animation – from ceiling fans to short-circuited wires to animate insects, shadows, smoke, etc. The keen attention the art and animation team gave to these details will not escape your notice.

About halfway into the game your ‘world’ changes to a virtual one – and the designers were very creative with the areas you traversed. This device is similar to what was employed in The Longest Journey (I said 'similar', not comparable) with Stark and Arcadia – though not as drastic. It works well, keeping your interest in where you are and what you are doing, rarely feeling contrived solely for the purpose of extended game play. 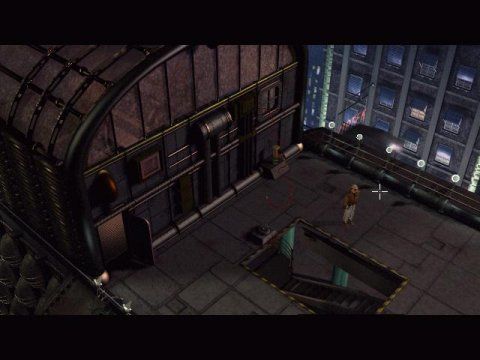 Puzzles, puzzles, click all about it! There are puzzles a-plenty, and at some point you will think that Joshua is hefting around some killer backpack with all the inventory items he will end up carrying. However, there are no red herrings, as you will find a use for each item. Most puzzles are very logical, with the exception of a few “outside the box” (at least for me) that represented some challenge. Fun and rarely frustrating, and never obtuse or nonsensical.

Most character interaction takes place in the “real” world, and is spread satisfyingly throughout the game. Occasionally during conversation you will be presented with your choice of response - but this is rare and there is no 'trick' to selecting the right response. I would have liked it if the story were spread out a little more instead of 'dumped' into cut-scenes. However, the FMV’s are of very good quality, considering this game was published in ‘99, and the shift into gameplay is fairly seamless, as mentioned.

I hardly think there is a question as to whether this game is worth purchasing – as it is only $9.95 plus S&H from various retailers - and it comes box and all, unlike some companies who consign their older games to a jewel case only. A jewel case between two fancy bookends just doesn’t look right. So pop that twenty-dollar bill of mad money hidden in your wallet/purse and buy it. Many intensive gaming hours and three discs later, you will be very happy you did.

This is a fun, puzzle-intensive, good-looking game that satisfies in almost every respect. The fun-factor far exceeds the retail price. Go, buy.

GAME INFO Nightlong: Union City Conspiracy is an adventure game by Trecision released in 19971999 for PC. It has a Illustrated realism style and is played in a Third-Person perspective.

What our readers think of Nightlong

4.5 stars out of 5
Average based on 7 ratings
Your rating