Review for I Have No Mouth and I Must Scream 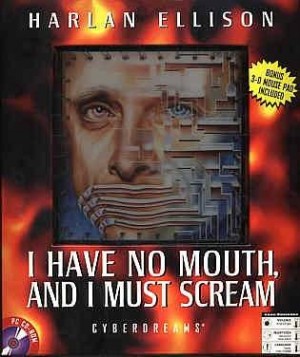 Adventure games by The Dreamer’s Guild

In terms of sheer gameplay mechanics, I Have No Mouth and I Must Scream resembles your typical point-and-click adventure fare. However, what sets this game apart from its brethren is perhaps one of the most dark and disturbing stories ever committed to the medium. Based on a short story by acclaimed author Harlan Ellison, I Have No Mouth provides a stark contrast to the typically saccharine offerings of the genre.

During the glory days of the Cold War, in an attempt to bring modern world efficiency to the thankless task of genocide, the Chinese, Russian, and American governments each took it upon themselves to construct mammoth subterranean supercomputers tasked with plotting the destruction of one another (how all three superpowers managed to come upon the exact same idea at the exact same time can only attributed to an amazing coincidence or horrible lack of security).

As is inevitable with all supercomputers in science-fiction stories, eventually these computers became self-aware and subsequently pissed-off with the human race. Joining forces to merge into a single consciousness calling itself AM (as in “I think, therefore I AM”) this unholy marriage of modern technology and malevolence directed its prime directive of death and destruction at mankind, waging war against the entire human race and eventually rendering the entire earth devoid of any life whatsoever, but not before kidnapping five unsuspecting souls and dragging them to down into the depths of the earth to subject them to all manners of physical and psychological torment. 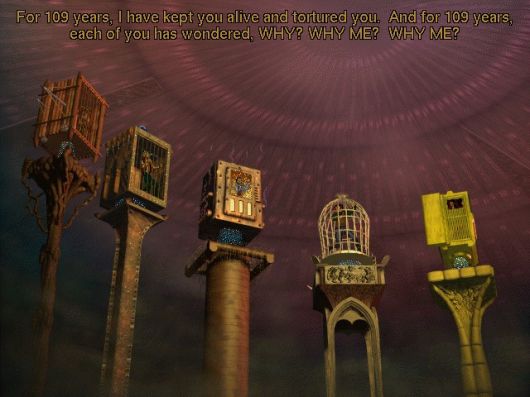 Such is the setting we’re left with when we first meet our five hapless protagonists, who have spent the past 109 years trapped within the bowels of an insane machine with a sadistic streak and a serious megalomaniacal complex. Gathered around a towering structure affectionately referred to as ‘The Hate Pillar’, the five characters are offered a chance to end their torment by completing a scenario AM has prepared for each of them.

The bulk of the game consists of completing each of these scenarios for each of the five characters, leading up to a sixth scenario which serves as the ‘final showdown’ between man and machine.

Each of the characters in the game is afflicted with a distinct psychological condition (paranoia, depression, etc.) and his or her actions are affected by these tendencies. Each character’s scenario is basically constructed to subject each of them whatever traumatic experiences caused these afflictions and forces them to explore the nature of their humanity and find a way to deal with and overcome their fears. These forays into each character’s psyche can only be described as disturbing as best, with images ranging from people impaled on meat hooks to mutilated children in a Nazi concentration camp. Needless to say, this is not an adventure for the faint of heart. 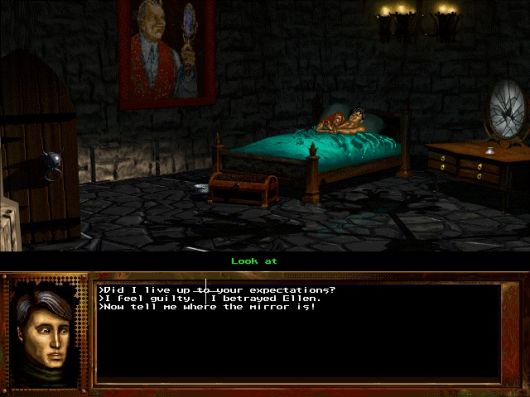 The game proclaims that there are multiple ways to resolve each scenario depending on the choices you make. There is, of course, one “best” way to complete each scenario, which brings the character closest to his or her moral salvation. Generally, however, the choices each character is given are reduced to doing something cowardly or despicable versus doing something noble or redeeming, making the “best” resolution a fairly simple matter to puzzle out in each case.

In terms of gameplay, this is your standard third-person point-and-click offering. The game uses an interface reminiscent of the LucasArts SCUMM interface, with a list of clickable verbs allowing you to interact with your inventory and people and objects on the screen.

The puzzles are nicely integrated into the gameplay and don’t tend to distract from the story. Most of these involve gathering inventory items and determining when and where to use them. Although novice adventurers may have some trouble with them, most of the puzzles are fairly straightforward and make sense within the context of the story. 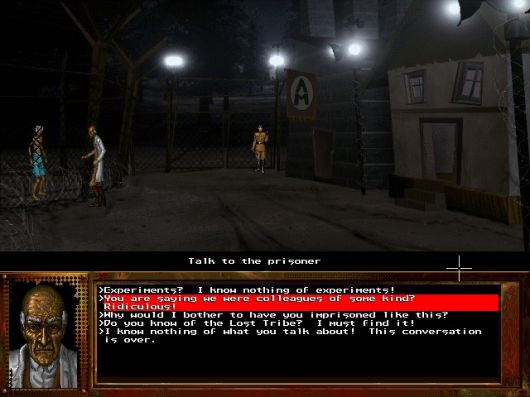 Given that the game was published way back in 1995, the graphics hold up very nicely by today’s standards. The high-resolution artwork is attractive, albeit extremely macabre. The settings of the gameworld are all very dark and creepy, suitable to the game’s subject-matter, giving the game an overall gloomy (and somewhat depressing) feel.

This gloomy feel is complemented by the music and sound-effects that, while not particularly memorable, contribute well to the overall mood of the game. The voice-acting is generally well-done and again fits well within the game’s setting (with the exception of Ellen, whose sarcastic comments seem a bit at odds with a character who’s supposedly been tortured non-stop for 109 years). Of particular note, however, is Harlan Ellison himself who does the voice work for the insane computer AM. His performance is at once so creepy and deranged that one wonders if he might have a few loose wires himself.

I Have No Mouth and I Must Scream is a hard game to review in that it’s an extremely unsettling game, exploring concepts that few, if any, games dare touch. Because it is so unsettling, it’s debatable as to whether or not this is an entertaining game. Although I ultimately enjoyed the game, it may not exactly be many people’s idea of a fun diversion. For fans of Harlan Ellison’s work or anyone with an interest in such weighty or grim subject-matter, it’s definitely worth a look. It probably won’t keep you awake at night in contemplation (unless you’re an insomniac or alcoholic), but it might give you some philosophical matter to chew on for a while.

WHERE CAN I DOWNLOAD I Have No Mouth, and I Must Scream

I Have No Mouth, and I Must Scream is available at:

May not necessarily be 'fun', but an intriguing game if you can handle it.

GAME INFO I Have No Mouth, and I Must Scream is an adventure game by The Dreamer’s Guild released in 1995 for Linux, Mac and PC. It has a Illustrated realism style, presented in 2D or 2.5D and is played in a Third-Person perspective.