Starship Titanic begins very oddly. Apparently you are sitting in your house, minding your own business on a normal day. Your computer sits on the table in front of you. You must take a CD with Starship Titanic's logo on it and put it in your computer. After doing this, the big ship in question crashes into your house. So begins this disappointing adventure game.

Starship Titanic could have been so much. The idea of exploring the "starship that cannot possibly go wrong" is fascinating, especially coming on the heels of the amazing Titanic movie. Unfortunately the whole idea is simply done wrong.

Where to start? Well, the biggest positive is the graphics, which are quite amazing. The animation is extraordinary, at the expense of slower computers. There was actually slowdown on my K6-2 266 MHz during one of the cut scenes, and that is inexcusable. But the graphics are wonderful and the art-deco style is rather amusing; a reflection of the warped mind of Douglas Adams. 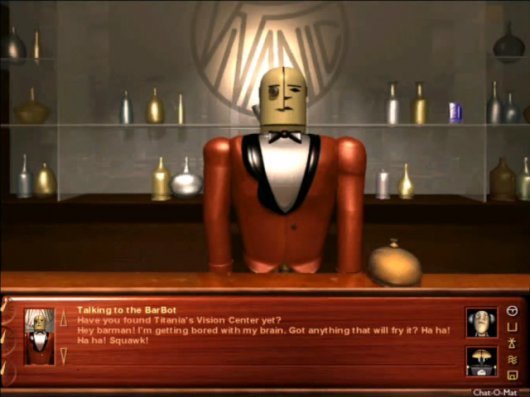 Everything else about Starship Titanic is weak, though. The panning is horrible; it takes five or six turns and advances and retraces to finally look at the area you want to look at. The forward movement and turning is lighting fast, which is more of an annoyance than an assistance because it's very easy to lose track of where exactly you are. The fact that much of the scenery is repetitive isn't a great benefit to your mental mapping either. Of course, there really aren't too many places to go considering the size of the ship, which is another negative aspect of the game.

The second area of weakness is the storyline. I was hoping for some interesting twists or turns in the storyline, but it's relentlessly boring and Kings Quest-like in that you know your goal at the beginning and you spend the entire game reaching that goal with absolutely nothing else to do.

The third area of weakness is the inane puzzles. They are contrived and unnecessary; puzzles for the simple sake of having a puzzle there, disregarding the fact that a puzzle makes no sense there. This combined with the complete lack of human interaction should put Myst fans right at home. 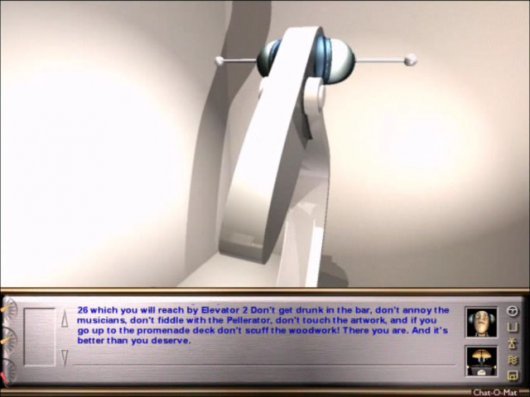 Which brings me to the next point: the supporting characters. You are the only human to be found in the game; the starship is populated by humanoid robots who are quite well animated and often humorous in both their voices and their words (chalk that up to the Monty Python team). But they are also the largest disappointment in this game.

When a game tells you that it's going to offer something new, something revolutionary, you have to take it with a grain of salt. In the case of Starship Titanic, the game made promises of a revolutionary completely open conversation system allowing you to ask the various ship robots anything you want. That much is true; you can ask anything. And they won't understand or respond correctly to a single thing. Ask what's wrong with the ship, or ask who their favorite Spice Girl is. The response will be the same. It will have absolutely no relevance to what you asked. This is not a fantastically advanced conversation system; this is an antiquated keyword-recognition system that is way weaker than most similar systems, meaning you'll get no help from anyone and have no idea what's going on.

Starship Titanic makes for some nice screen shots and features some beautiful animation, but that's where the positives end. Considering it received quite a bit of attention from gaming publications, it's really a shame that it's such a disappointment. If adventure gaming is ever going to make a real comeback we don't need quirky Myst clones at the forefront--especially ones that take two years to make.

Unless you\'re a die-hard Douglas Adams fan, don\'t waste your time; Myst clones can be much better than this.

GAME INFO Starship Titanic is an adventure game by Digital Village released in 1998 for Mac and PC. It has a Illustrated realism style and is played in a First-Person perspective.

What our readers think of Starship Titanic