We get a small commission from any books sold.
All Bitmap Books
Written by
Tamara Schembri — March 13, 2003

The Feeble Files, from the people who brought us the Simon the Sorcerer games, is an absolute treat for the thirsty adventure gamer: vast and sprawling, hugely ambitious, wide in scope, original, funny, poignant and touching.

Set in a far-future alien comedy version of George Orwell’s 1984, the game follows the adventures of Feeble, an initially rather pathetic specimen of alienhood, who inadvertently becomes the most unlikely rebel ever. Feeble lives in a highly oppressive society, where the entire galaxy is controlled by a totalitarian entity known as the OmniBrain. The OmniBrain controls every minute aspect of people’s lives. Relationships, for example, are strictly monitored and controlled – to make any kind of romantic advance, a citizen must possess a Hot Love Permit. Disobedience is not an option, as citizens are required to take ‘nourishing’ pills daily that, in reality, cause them to become placid and apathetic. The slightest infringement of the laws, or directives – such as being unhappy – are punished by ‘personality restructuring’. At the beginning of his game, Feeble crashes his spaceship during a routine visit to Earth. As punishment for damaging Company property, he is sent to the dreaded prison Cygnus Alpha. Here he meets Delores, who belongs to the Freedom Fighters, a group that has woken up to the oppression people are subjected to and are committed to overthrowing the OmniBrain.

AdventureSoft have made a significant effort to create a living, breathing world – and it shows. Feeble’s universe is full of little touches that are largely unnecessary to complete the game, but that bring the world to life. One of the largest resources is the encyclopaedia, which has numerous entries fleshing out details of laws, customs and habits – the writers have created an entire culture for the player to immerse himself in. This serves to make the game world far richer, and to give the impression that it exists independent of the player. Other nice touches include the announcements over the intercom in Metro Prime and the working television in Cygnus Alpha, where watching the programs is as enjoyable and funny as playing the game. There are references galore to AdventureSoft’s previous games – apart from a working arcade machine where you can play ‘Sordid’s Puzzle Castle’, there are Simon the Sorcerer posters stuck up around Metro Prime, not to mention graffiti mocking Simon. 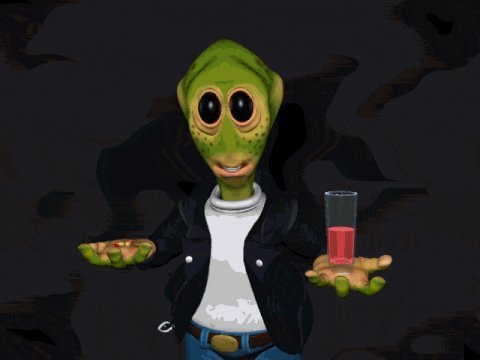 This attention to detail can be seen in most aspects of The Feeble Files – it’s evident that a lot of love has gone into the making of the game. The graphics, while obviously dated by modern standards, have a disctinctive flair. They’re bright, colourful and somewhat cartoony, and while this contrasts with the rather dark undertones in the game, it never jars. Frequent cutscenes reward the player for a job well done. These are often rather long, but are always interesting enough to keep the player’s attention, and usually very funny. The voice acting is superb and the British accents perfectly complement the drily humorous tone of the game. The Feeble Files is built on sarcasm and the irony of Catch-22 situations. Indeed, humour underpins the entire game, adding comic relief where the alien world reflects our own. The puzzles are always well-thought-out and logical – the player never feels cheated after solving them. Having said that, they are often extremely hard – The Feeble Files is one of the most difficult games around. I don’t necessarily see that as a disadvantage, but it means that the game is certainly not suited for beginners – even veterans should expect to have to pick up a walkthrough once or twice.

While The Feeble Files is a great game, it isn’t perfect. Its greatest problem, as far as I am concerned, is its interface. I got used to it in time, but it is fiddly and overcomplicated, and often frustrated me. There are separate icons for picking an object up, using an object on its own, and using two objects together – totally unnecessary and counter-intuitive. The inventory and other functions are accessed through the Oracle, a hi-tech wristwatch. Scrolling through the inventory is very slow, especially since it isn’t possible to move frequently-used items to the top. This is enough to frustrate the more impatient of us. The fact that the screen closes if you inadvertently move your mouse to the side – something I seemed to do a lot – makes this maddening. In fact, sluggishness seems to be a regular feature of The Feeble Files – your character walks painfully slowly, and in a rather unnatural manner. There is no ’run’ option. This is the single most annoying thing about the game. It discouraged me from exploring as much as I would have, as I simply couldn’t stand watching Feeble walk slo-o-o-owly across the screen more often than necessary.

Overall, The Feeble Files is an excellent adventure, let down only by a few relatively small details. It’s well worth picking up - epic in both size and scope, it will keep the average adventure gamer entertained for months.

A truly excellent game, which just falls short of brilliance.

What our readers think of The Feeble Files

annoyware instead of entertainment - what a pity

A most annoying game. Illogical puzzles, making it harder by giving you zero feedback if you are on right track, but needs some additional stuff to do. Game designers seem to love punishing the player... Read the review »

I haven't finished the game. If you think this invalidates my review, feel free to stop reading. This game has no redeeming qualities. I don't know how the AG reviewer could avoid noticing all the... Read the review »