Adventure games by The Pixel Shop

After playing a certain monochromatic renamed/repackaged science fiction adventure game earlier this year, I have to admit I wasn't wildly optomistic about the chances of our adventure genre being revitalized by maverick independent shops. Well, I'm feeling a lot better now after playing Cracking the Conspiracy, the very independent new adventure from Dave and Brian, two wild and crazy Wisconsonian brothers who call themselves The Pixel Shop.

This is a first-person, point-and-click adventure in a very standard and dependable format. The user interface is so intuitive the game doesn't even come with a manual. This is not a complaint.

The story begins, as these stories usually do, with your character getting a frantic message about secret government experiments deep beneath the Arizona desert. You show up to an abandoned mine, and your first challenge is to figure out how to get in. 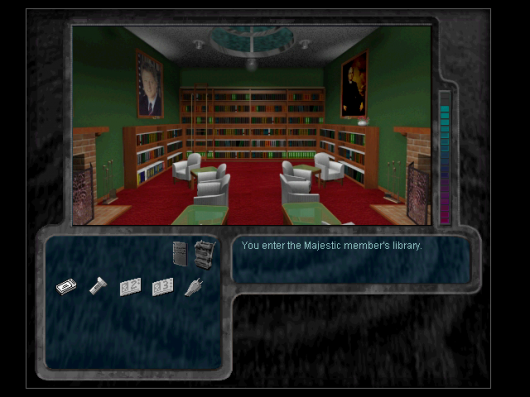 From the very first moments of this game, from the great-looking car you show up in, to the smart-assed ghost who guards the mine, to the details of the desert surroundings, this game creates a sassy, fun and compelling atmosphere. Once you're in the mine, the story if off and running, and you don't want to slow down until you've completely finished cracking the, uh, you-know-what.

This is a Macromedia Director-based game, and you may know that I'm a big fan of this format, which I feel is ideal for adventures. The graphics are crisp and eye-pleasing and create surroundings that are a pleasure to explore. This virtue cannot be overstated, because nothing frustrates me more when I'm playing a game and I'm staring stupidly at the screen, trying to resolve a muddy image or play hunt-the-pixel.

The movement in the game is a mouse-driven slideshow, with occasional moments of full animated movement. 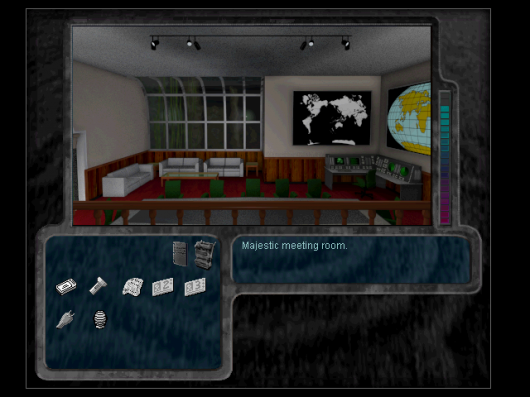 This is a lean and mean game. It's on one disk and it isn't long or full of expensive special effects. In fact, believe it or not, it PLAYS directly from the disk. When's the last time you played a game that did that?

What CTC does have is a crackling story with a mystery that simply demands to be solved.

The main thrust of your puzzle- and problem-solving involves finding passwords to a series of email messages that are either on the personal communicator your character is carrying or on various computers around the base. Each time you find a key to a new bit of information, it fleshes out the story more and leads you toward the next key. 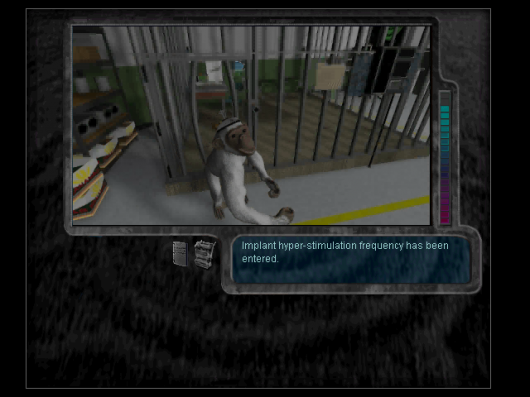 The puzzles are not too difficult, but you do have to pay close attention to the clues that are at hand. The information you pick up here and there give you the tools you need to solve the problems of the game.

The game is full of nice details that add pleasure to the experience. A particular favorite is the way your character grunts "Got it," every time he picks something useful up. The score is quite excellent as well.

I have two minor criticisms of the game. First, as in many games of this type, the surroundings you're exploring are suspiciously unpopulated. Perhaps it bothered me more in this game because otherwise the game felt so vividly real. I realize the small number of characters was probably a budget-driven issue. 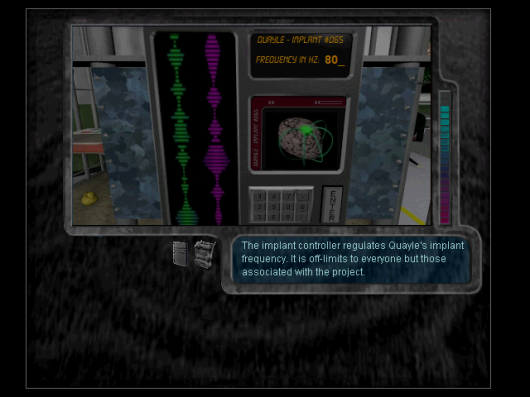 Second, on three separate occasions your "problem solving" involves the almost casual killing of someone. And I don't mean in self-defense, either. Three times! Now, this didn't offend me, but I imagine there will be some gamers put off by this plot device.

Still, I had a thoroughly good time playing Cracking the Conspiracy and I can heartily recommend this game. I really look forward to what The Pixel shop cooks up next!

In our adventure-challenged times, just what the doctor ordered.

GAME INFO Cracking the Conspiracy is an adventure game by The Pixel Shop released in 1999 for PC. It has a Illustrated realism style and is played in a First-Person perspective.

What our readers think of Cracking the Conspiracy