This is a pleasant, breezy, pretty game that I enjoyed very much. It’s not ground-breaking; it will start no new trends; it will be on very few player’s Best I’ve Ever Played lists (mine, either). But I’m very glad I played it.

The setup is very simple. You’ve been invited to peruse a mysterious museum. The owner of the museum, an rich eccentric widower named Cassandra, has disappeared with his daughter. Apparently no one has a clue to their whereabouts. Only you, the player, can solve the mystery. Hey, ain’t that always the way it is?

The format of this game is first person point-and-click. It’s mostly slide show with occasional full motion movement, video sprites of characters, and some lovely (if brief) flying cutscenes. 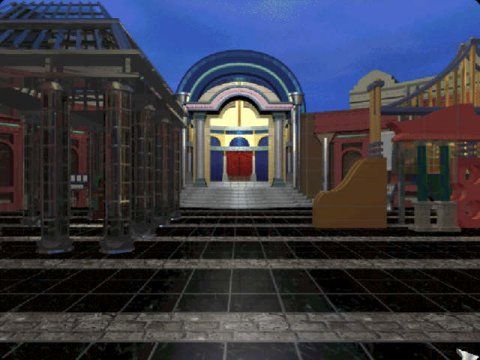 After an introductory conversation with the caretaker of the museum, you are left to your own devices. The building consists of two floors. The galleries, dining room and kitchen are on the first floor, and the family’s bedrooms and a studio are on the second floor. The first part of the game consist of simply wandering around the building, enjoying the different-themed galleries (modern, ancient, Chinese, medieval, etc.) and snooping around the family’s bedrooms.

Then it’s time to get on with the game. This is accomplished by heading up the second floor studio. There are four different vases (Urns? Give me a break, I’m just a boy), each in a different style. You pick one, and try to find the gallery the vase belongs in which one.

This isn’t terribly difficult. I don’t think I got one wrong on the first try.

Then the fun part starts. When you identify the correct gallery, you place the vase on a pedestal that’s waiting for it, and you are magically transported to a beautiful new environment related to that gallery’s theme.

In each environment are a group of puzzles to be completed. Each puzzle, when completed, gives you a part of a big puzzle that must be completed before you can depart from this environment.

Each of the environments – a medieval castle, an incredible art deco palace, a wacky ultra-modern house – are rendered in beautiful and eye-pleasing detail. The deco area in particular was a visual feast.

The puzzles are, for the most part, very very mild. Most of them relate to clues scattered about the museum, so the game becomes an entertaining scavenger hunt, as you roam around the place looking for . . . the Chinese zodiac . . . the different kinds of oriental self-defense . . . the appropriate shape of a particular puzzle, etc.

One unique element some of these puzzles contain are a trivia element. There is a television quiz that feels like you’re on a game show. There are puzzles that relate to geography, music, and history. Some of them have clues in the museum, and others did not. This will irritate some players, as there seems to be an unwritten rule that games should be self-contained; that is, all answers to all questions should be somewhere IN the game. However, being a trivia buff and a game show veteran myself, I loved this element to the game. And NONE of the quizzes were that difficult. In fact, there is only one puzzle in the game that I would call difficult (a stained glass window puzzle), and that’s mostly because of a very vague clue.

I really enjoyed the offbeat nature of the puzzles in this game – they were a real breath of fresh air.

Now on to the bad bits. The Cassandra Galleries suffers in three main areas, all having to do with story. First of all, the story is anemic, had no development, and no follow-through whatsoever. Now, don’t get me wrong, I don’t mind games with thin stories that are merely excuses for stringing a bunch of fun puzzles together – not at all. But it does become irritating in a game like Cassandra. Why? Because the game PRETENDS the story is important. It asks you to pay attention to all sorts of details and elements from the backstory when it has nothing to do with finishing the game.

Second, the game is periodically interrupted by long, tedious reminisces by various characters that wander into the frame and ramble on and on about the Cassandras. Now, it would be different if the acting was good (like in Temujin). However, the most irritating thing about these interruptions is that, once again, the game is pretending that you’re getting important information to help you solve "the mystery" of the Cassandras’ disappearance.

Nothing could be further from the truth. You don’t solve any mystery at all You just solve the puzzles and the game is over. Which brings us to the third, and worst problem with this game. The ending. This game has to have the worst, lamest ending I’ve ever seen in a game.

Luckily, I had been adequately warned about this non-ending, and so I was ready for it. Therefore, I really enjoyed playing The Cassandra Galleries. But if were to innocently play this game and expect some terrific payoff regarding the Amazing Disappearing Cassandras, you’d be extremely disappointed – angry, even. This is yet another game that feels like it lost its budget toward the end.

Nevertheless, if you enjoy it for its lovely atmosphere and graphics, and its unusual puzzles, you’ll have a good time playing The Cassandra Galleries.

A nice, mild romp, but not a genre-definer by any stretch of the imagination.

GAME INFO The Cassandra Galleries is an adventure game by Kutoka released in 1997 for Mac and PC. It has a Illustrated realism style and is played in a First-Person perspective.

What our readers think of The Cassandra Galleries