We get a small commission from any books sold.
All Bitmap Books
Written by
Josh Roberts — August 31, 2003

Broken Sword: The Smoking Mirror is Revolution Software's follow-up to the extraordinary graphic adventure Circle of Blood (called Broken Sword: The Shadow of the Templars in Europe). Like its predecessor, The Smoking Mirror is a visually beautiful game that puts its two central characters, American adventurer George Stobbart and his French reporter girlfriend Nico Collard, in pursuit of the truth behind an age-old myth. This time, the two reluctant adventurers must travel the world in a race to stop the return of Tezcatlipoca, the legendary Mayan God of Death.

Unfortunately, the similarities to the original all but end there.

Although the game begins on an exciting note—Nico is kidnapped, and George finds himself tied to a chair in a burning house—it quickly deteriorates into a series of brainless puzzles and mostly humorless gags. While Circle of Blood featured a sprawling story of mystery and wonder, offset by George's timely wit, The Smoking Mirror relies almost entirely on poor jokes to hide its somewhat thin plot. 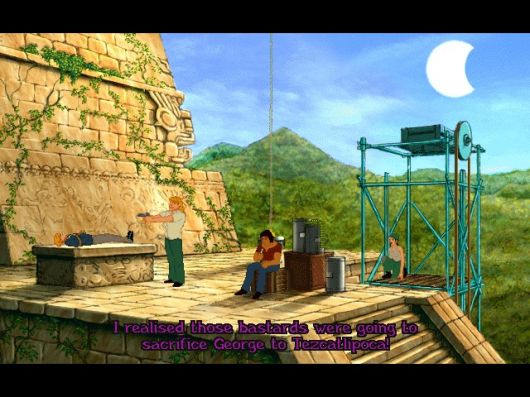 In the first game, George provided the comic relief against a serious and intriguing backdrop; here, the backdrop itself tries for humor but instead falls flat. (The tribe of Central American Indians enamored with their recent discovery of underwear is just one of many unnecessary and distracting gags.)

Missing is the real sense of depth and intrigue that made the original so exciting, and gone too are the more challenging puzzles. While Circle of Blood was hardly an Einstein-level challenge, it was intricately plotted and thought provoking, and most puzzles required a degree of consideration before the answer became obvious. Not so with The Smoking Mirror. The majority of puzzles are painfully easy to the point where when I reached the endgame, I began to wonder if I’d somehow missed part of the story. 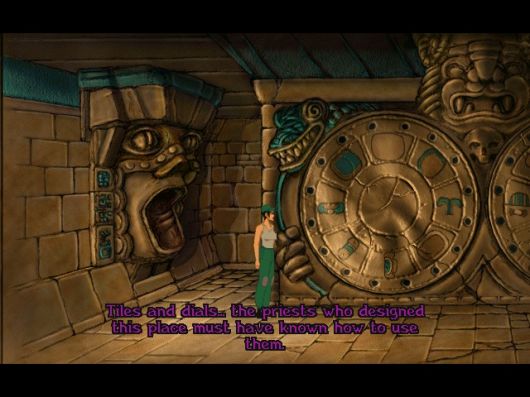 It's not all bad, of course. Like its predecessor, the graphics are impressive, as are the animated cut scenes that pop up as the story progresses. The ability to play as Nico in off-setting chapters is also a nice feature, and would have been a great way to drum up suspense with the cliffhanger endings if the game had been more intriguing as a whole.

Really, that's the heart of the problem: The most intriguing thing about The Smoking Mirror is how it could possibly have been created by the same folks who came up with its predecessor. If you're looking for a really great graphic adventure game, give Circle of Blood a try, but resist the temptation to pick up its sequel. Like the game's title implies, it’s all smoke and mirrors, and very little substance.

All smoke and mirrors, and very little substance.

What our readers think of Broken Sword 2: The Smoking Mirror

3.5 stars out of 5
Average based on 73 ratings
Your rating

The weak one in the series

As a standalone title, it's a mid-tear, not unenjoyable but kind of forgettable game as they were many back in the days, but it suffers badly from its comparison with the first one. The story... Read the review »

You never forget your first...

This was my first adventure game. A long, long time ago. More than 20 years. It was this game that made me fall in love with adventure games. I've played better, way better games, but... Read the review »

The puzzles often felt like they were just put in for the sake of being puzzles rather than as part of the story in the original. The story mixed in too much fantasy with reality... Read the review »